You may remember the days of the postcard, long before we got used to modern technology. They were the ways we kept in touch with others when we were having a good time on holiday - wish you were here!

You may also remember having a pen pal, perhaps when you were at school. Some of the volunteer centre team had pen pals in places as far away as London, Germany and even Mauritius!

Many of the volunteers on our Supported Volunteering Project at Barnsley CVS have not got access to technology or find it difficult. This means that when the rest of us were all joining in the next Zoom quiz or online social event during lockdown, they weren't able join in. It makes their isolation even worse.

We therefore set up Postcard Pals as an alternative way for our volunteers to communicate during the pandemic, particularly if they don’t have access to digital technology.

Volunteers have been matched with each other by the project workers and over a six-week period will be sending each other a postcard telling their pen pal what they have been doing or sharing facts about themselves.

Sometimes hearing the letter box go it's not a nice feeling, particularly when it maybe a bill, but we all like getting post, especially one that is handwritten just for you.  Hopefully Postcard Pals will bring a sense of excitement and positivity.

The project provides the stamps, postcards and instructions for the six-weeks, after that time, if the pen pals want to keep in touch and even meet up, that is up to them.

Sarah, the Supported Volunteering Coordinator, says. “We hope that this initiative, if successful, might be rolled out further as it has the potential of giving socially- isolated people an opportunity to connect with each other and build friendships.”

One volunteer who has just started the programme, says, "Even if my pen pal doesn’t write back to me, I am so pleased with myself that I have actually written the postcards as this makes me feel I am doing something".

Another volunteer says, “I really like writing the postcards and hope my pen pal wants to keep in touch afterwards”. 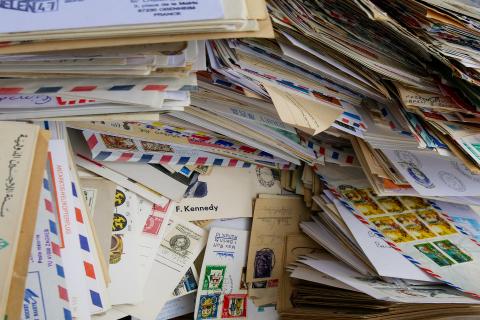